Years ago, when I was a devout Baptist church goer, I remember having a conversation with the first Lady of our church.  She told my sister and I that she held ALL the power in her household and she did it by convincing the Pastor that he was the King of the Castle.  She said that sometimes he would come in with the weight of the world on his shoulders, she said the parishioners, the Deacon Board and everyone else were pulling him in a million directions.  Instead of him articulating this to her, he would be mean and surly.  Barking at her to do this or that, he would often take his bad day out on her.  She said in the beginning of the marriage she would fly off right back at him.  Who did he think he was to to treat her so badly when she’d been cooking and cleaning and preparing his meals, she thought.  Then after dinner he’d stomp upstairs and slam the bedroom door, only to assume that she would be ready for sex after having treated her with disdain and arrogance.  One day she tried a different approach.  When he walked in yelling like the angry tyrant that he could often be, she spoke softly and walked right up to him and with her soft lips covered his.  She gently kneaded his shoulders and stared deeply into his eyes and asked if he would like a drink.  She skillfully directed his attention to her dress and her hair and asked if he liked what she was wearing.  She then whispered in his ear and told him that she had been thinking about him all day and couldn’t wait until the kids were asleep.  That day she realized the power of Love over aggression.

There is a gender war between black men and black women happening right before our very eyes. It isn’t silent or stealthy, it is in your face nasty.  You can see it everywhere you look.  It arises when someone posts something about a person not being faithful or dating outside of their race, undoubtedly the nasty comments begin.   Unfortunately, negative thought processes among Black men and Black women have been brewing now for years. Social Media is to blame for a large part of the nastiness that is now loud and clear for the world to see. It’s almost as if we hate one another.  I mean,  who can believe in “Black Love” when we talk about each other so badly.   Prior to the social media age and in the past, certain conversations about the opposite sex remained amongst one’s peer group.  You might hear complaints or certain perceptions shared in the beauty salons or the barber shops but NEVER as obviously shameless as now comes across on today’s social media platforms.  One example of the abject disrespect is noted film maker and “Hidden Colors” creator Tariq Nasheed.  Recently a YouTube video surfaced of him comparing white women and Brazilian women to African-American women.  He said that the respect was completely different.  He also sang the praises of Brazilian women, their thin bodies and their “Real Hair”.  He noted that a white woman and black man was always a good match.  His most popular term for Black women that date outside their race is “The Negro Bed Wench”.  While that’s not my cup of tea, I will admit that I could see why some of the rhetoric that I hear discussed among black men about us black women could drive us away.  Sometimes I think that the Black Man is a walking contradiction.  Why lust after the strippers and easy women that are obviously always going to be there, but then talk down about easy tricks and Thots on social media and amongst your peer groups?

This among other hurtful rejections from notable African-American men are the reasons that Black Women have increasingly accepted or considered matches with their non-black counterparts.

The Truth is that Black Women’s treatment of Black Men is no better. This split has been brewing most of my life, that I can remember.  My mother owned a beauty salon, that’s all they talked about.  “Girl you know he ain’t shit”… “He’s so damn trifling.  He sitting around trying to start a business, he needs to get a real damn job.”  This constant bickering and putting our men down has not helped our relationships. I can speak particularly about my personal journey.  My mother NEVER supported my father’s dreams of owning his own insurance business.  Listen, he just wasn’t the dude to work the corporate plantation.  When the money was good, it was great.  When it wasn’t she would TEAR HIM TO SHREDS.  She talked about him to anyone that would listen.  To my aunts, to her clients to anyone that had even a hint of something nice to say about him.  Eventually, he quit trying altogether.  Things got so bad that he stopped coming home.  To add insult to injury they remained together that way for 40 years.  Ripping each other to shreds.  Her, completely emasculating his manhood and character, ignoring any good things that he attempted to build in our family and him cheating so ignorantly and disgustingly that a guy I was dating actually brought it up to me. “Hey” he said one day.  “Why is your dad being so foul to your mom?”  Just like Mama Braxton exclaimed during an episode of “Braxton Family Values”.  My dad was “Laying it low & Spreading it wide.”  His behavior was all over our neighborhood, behavior one might label “FuckBoy” behavior.

Yes!  Ladies, we have even created a brand for a specific type of black man.  We call them “FuckBoys”.  This brand has been exchanged between black women for a few years and has gained popularity among popular social media websites.  The title “FuckBoy” has various meanings.  I looked this up in the Urban Dictionary and found several perspectives.  The main ones that I hear are this:  A guy (grown man) that has a bunch of kids and  spends time with more than one of his children’s mothers.  He is actively living between at least two of them but still seeking new women to meet and sleep with. He has no intention of settling down with any woman, lies constantly and his only past time is to have sex with women.  That is where I’ll stop because it can get extremely nasty and definitely the message that I’m not attempting to send in this blog.

I’ve interviewed men and women with different perspectives and on both sides, I see the same similarity. Black Women and Black Men are dealing with a serious level of anger towards one another.  What I have found is that it may not just be the last “BAD” relationship.  This may be something that you were reared with.  We are all a product of the experiences of our upbringing.  I do believe we can get beyond this.

Regardless of the things that we read, the occasional Thot or Fuckboy, Black Love is real. I know we sincerely love and want one another, so why can’t we come together? 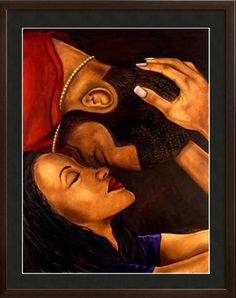 I tested this theory out recently, by posting this sentiment on social media.  I said: “Regardless of what you have said about me, black man, I will NEVER leave you.  I was made for you.”

The response was overwhelming.  I probably had about 40 comments from black men telling me that they love what I said and thanking me for loving and supporting them. I even had a sister or two give me kudos for taking this perspective.  I really believe if we stop airing our dirty laundry to one another, stop ALLOWING certain men or women to play us and start seeing black men and women as the Kings and Queens that we are, I believe we will see different behavior.

I’m encouraging us ALL, on both sides to focus on the LOVE.  I truly believe LOVE is the key and that’s the new route that I’ll be taking.